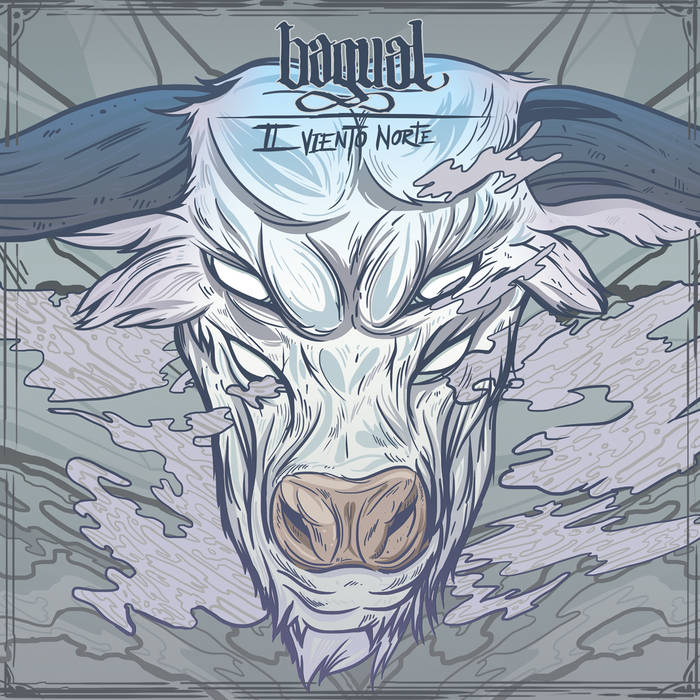 Some of the Finest Stoner Metal from the South American scene !

Bagual is a stoner metal band from Santiago (Chile) who has been active in their country since its formation in 2012. The band consists of Francisco “Greengo” Yañez (guitars and vocals), Felipe Machuca (guitars), Julián “Lobo” Inostroza (bass) and Alejandro Clavijo (drums).

Also, the name of the band recalls to a cattle who has regained its freedom and now lives in a wild environment without limitations, a fact the band wants to communicate not only through their music and lyrics but with their albums incredible artwork.

After listening to their songs in the Chilean Fuzz compilations, and the release of their debut “I: Viento Sur”, released in 2014, you could suspect they were gonna get a spot between the best bands of the South American heavy underground scene. For me, that happened with the release of their sophomore album “II: Viento Norte”, an album that resumes in its 35 minutes, the strength and energy of Stoner Metal.

As I said previously, Bagual have all the trademarks of the Stoner Metal sound: powerful riffs, gritty vocals, downtuned riffs, heavy bass pulses and hard hitting drums. The album kicks off with the powerful and high driven “Amanecer”, a fast song full of energy and intense singing, and for that, it’s the perfect soundtrack to start a road trip. It’s followed by “Maeses” a song which slows the tempo a little bit, but not that much, remember you’re listening to Stoner Metal. The guitars and bass arrangements are very good and the passion with which “Greengo” sings on this tune is remarkable.

“La Montaña” is a song that benefits from some amazing lyrics that evokes a personal journey to find the true self. For “Horizonte De Sucesos” the band incorporates heavy psych elements, especially in the guitar effects and some ethereal vocals, which helps in creating a heartfelt vibe.

“Kutral” is the song with the most metal vibe of the entire album and in “Asamblea” the band incorporates a doomier vibe, a song in which the bass playing of “Lobo” and the twin guitar melodies are the winners. This pair of songs reminds me of a heavier version of Thin Lizzy.

“Viento Norte” is the perfect album’s closer, in almost 7 minutes the song summarizes all the band’s musical influences. The song closes with spoken words from South American stoner legend Sergio Ch (Los Natas/Ararat/Soldati), telling us the Bagual regains its freedom and now lives without any chains.

With this album, Bagual delivers one of the best Stoner albums from the South American heavy scene.

Since the release of their first album, the band has a well-defined vision of what they want to achieve visually. For “II: Viento Norte” they collaborated with graphic designer David Gómez (Wart89) to achieve the magnificence of the Bagual after breaking his chains to live in freedom and without any restraints. This beautiful artwork truly deserves a future vinyl release !