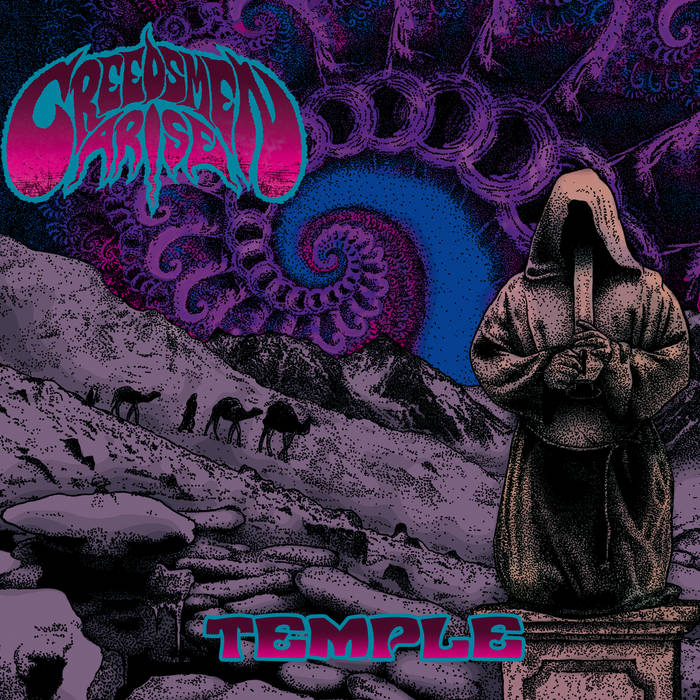 Have you ever wondered what happened to the Weedian Priests?

Once again, Sweden knows what’s going on. This time, we are going to talk about a young Swedish band who just self-released their first EP : Temple. And, spoilers alert: it is a kick-ass one.

It takes a mere look at the cover art to know what you are going to listen: people with bongs walking in the desert as a trippy vortex is sucking everything up?  Yup, no doubt, this is a stoner metal album, and you can bet the Sleep/Iommi riff worship is going to suck you up in that fuzzy, psychedelic vortex. As the presence of the well-known figures on the cover shows (the weed-priests from the almighty Dopesmoker), this EP has an interesting concept: the band states that “it tells the story of what happened centuries after the legendary Dopesmoker.” So it does not come as a surprise, but you will find everything you expect from a band who worships the gods of stoner/doom metal.

So, if they do not reinvent the wheel, what do they do that might be interesting enough for you to listen to their music? Well, their vocalist does a very good job. Indeed, he has a pleasing, groovy flow and can sing, cry and chant as well. There is enough diversity to keep you listening and not get bored. Moreover, the chanting parts on the two first tracks really bring something to the table as they slow down the pace and fit perfectly the concept of the album: the pilgrimage of a cult travelling through the desert – you can almost picture yourself among them, high as hell, chanting as your settlement moves slowly under the burning sun.

The last track, “Circle of Clergymen”, will surprise more than one with its great aggressive riffs and angry vocals closer to punk than to the doom/stoner sound we are used to. The call of the pit is strong in that one and leaves you wanting more.

A follow-up to the story told in Dopesmoker? You know what to do.