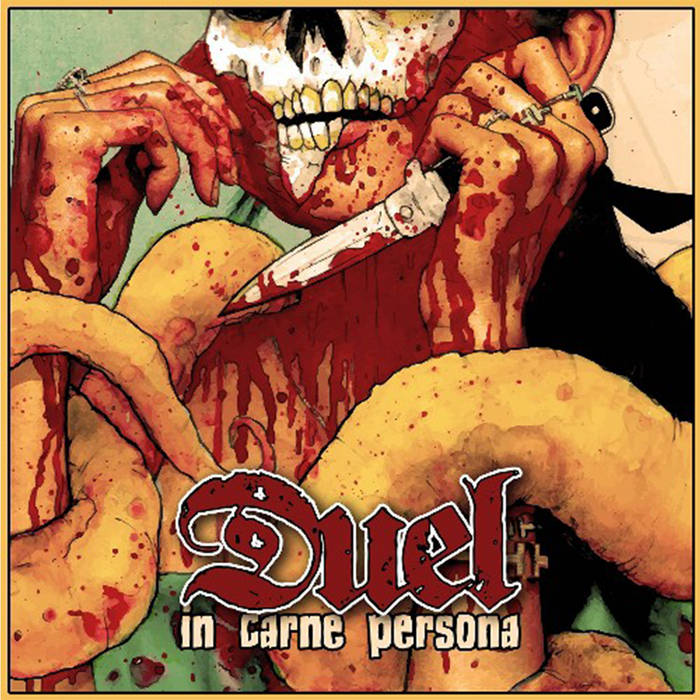 Austin’s quatuor is back on Heavy Psych Sounds Records with In Carne Persona, its fourth LP. A true avalanche of old school and ground-burning heavy metal riffs, with touches of psychedelia.

Since their outstanding debut album entitled Fears of the Dead in 2016, DUEL keeps on rocking the heavy scene. Five years punctuated by three albums of stoner-infused heavy metal and memorable live shows have imposed the Texan quatuor as an unmistakable actor on the heavy planet.

In Carne Persona opens with a pure DUEL song : “Children of the Fire”. This high-paced track follows Fear of the Dead’s direct line, with its manic guitar solo over a power chord composition, just before Tom Frank’s classic singing. “Children of Fire” announces how the album is : enraged, straightforward, ultra-catchy.

However, “The Veil” brings something quite new in DUEL’s music : psychedelia. The verses’ composition has an oriental side that reinforces the psychedelic atmosphere. The music does not lose any efficiency : heavy metal comes back in the chorus. And the magic precisely resides in the transitions between these two phases, when the chorus blast works as a rocket launch pad for the solos.

Then, “Anchor” comes back to DUEL’s traditional music with its punk attitude and its dual guitar licks. It is another song that will please DUEL’s early fans. The contrast is high with the beginning of the following track entitled “Behind the Sound”. The intro is clearer and melodious. After one minute, the music turns into classic heavy metal.

Fifth track “Bite Back” spreads more rage with it’s chug guitar riff.  “Wave of your Hand” is made out of the same wood – or should I say metal ? The slow and crushing first passage suggests this track may be the most doom-rooted one on this album. The chorus is very catchy too.

“Dead Eyes” is another great track. It heads more to stoner territory while manic solos keep on bringing psychedelia. The spooky vibe conveyed by the verses adds a welcome variation in composition and atmosphere. Next one “Lizard Tongue” comes back to DUEL’s roots. It is classic but still efficient. Last track is a great conclusion. “Blood and Claw” is a 6-minutes long mix of psych-stoner breaks and heavy choruses. Just as in “The Veil”, the transitions between these two faces work wonders.

Finally, In Carne Persona may not be the most original album you will hear this year, as it sticks with DUEL’s musical tradition. But still, it is impressive to see how Austin’s quatuor is an infinite source of great riffs and how they managed to add some subtle ingredients to them. When “In Carne Persona” finished, I just wanted one thing : to see DUEL on stage.