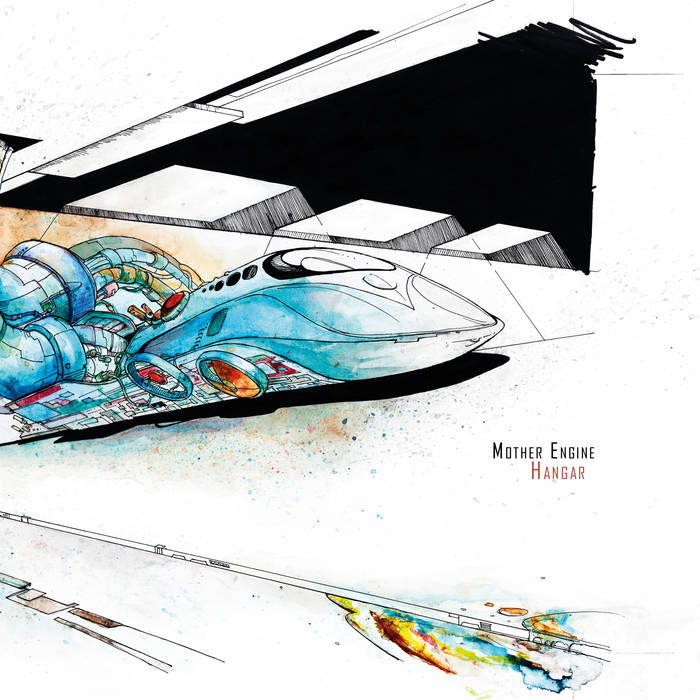 Since I discovered Mother Engine thanks to a Youtube video where they were playing at the Stoned From The Underground Festival campsite for an unofficial gig, it rapidly became one of my favourite band. At that time they only had their outstanding debut album out, “Muttermaschine“. Then the “Mother Engine” spacecraft (yep that’s its name) crashed on a hostile planet, X-Alpha Wolf, in 2015 with “Absturz“. With this 2nd album the guys went even further into their own instrumental Heavy-Psych atmosphere. Now in 2017 they’re back with a new spaceship, bigger, more solid, more complex, ready to face the entire universe, exactly as how Mother Engine’s music has evolved since they started out. Ladies & Gentlemen here is “Hangar“, clearly one of the best album you’ll hear this year.

First thing to note is Hangar consists of 4 tracks : Prototyp, Biosp(i)rit, Tokamak, Weihe/Leerlauf. Each of them above the 18-minute mark. Each of them has its own side on the double LP produced by Heavy Psych Sounds label.

Now you’re starting to understand Mother Engine didn’t take us for fools with this new release. More than 75 minutes of highly addictive instrumental psychedelic awesomeness, I hope you fuzzers are ready for one of the biggest trip of your life !

Now I won’t describe each track, as I believe each of us will have its own experience of Mother Engine’s masterpiece.

I’m just going to say what Cornelius Grünert (Drums), Christian Dressel (Bass) and Chris Trautenbach (Guitar) created as a group of music lovers forming a unique entity is a real work of art. The songwriting is mindblowing, layers upon layers, they manage to tell a story without any vocals.

Of course I recommend you to focus entirely on the music if you have the time and the envy, but what I also love with this kind music is it’s an awesome “background music”. Personally, I find myself so much more focused when working with instrumental music as a background than with ones with vocals, and with Mother Engine I’m just 666x more productive 😀

With “Hangar”, I now think Mother Engine can be placed at the same level of mastery than their fathers of Colour Haze. And along with RotoR, those 3 bands prove once again the Germans are truly the kings of complex mind-bending instrumental Heavy-Psych, congrats boys.

What ? That’s a strong enough argument to make you press the play button no ? 😉

I recommend you to read the story of the album on their Bandcamp. You’ll, for example, learn that they worked with Marco Naumann ( Colour Haze, My Sleeping Karma, Dunajam, Up in Smoke,…) for the recording of this album. You can also read a little background story on each of those 4 tracks, it’s nice to see they pushed the concept that far since their first album.