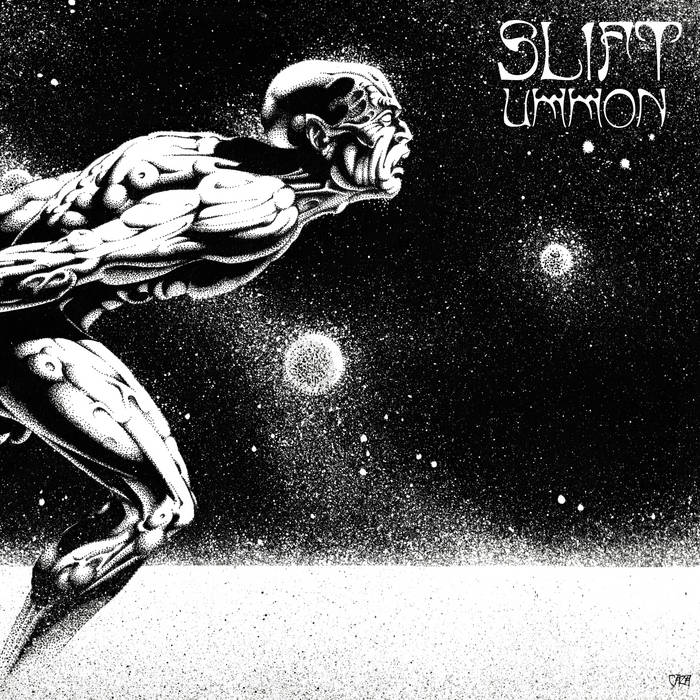 Dark was space, cold were the stars, motorized was their Space Rock

In a stellar first third of the year for space rock and heavy psych (Elder, Yuri Gagarin, Lowrider, Elephant Tree, you name it!), there is one album to rule them all, one album to find them, one album to bring them all and in the darkness bind them. It is the third record by Slift, named Ummon.

Slift are three guys from Toulouse who had previously released two records, “Space is the Key” and “La Planète Inexplorée”. In these records, the trio exhibited a muscled space-rock which reminded a lot to the virtues of the latest Oh Sees’ sound. A solid garage basis for building up kraut-like structures with huge loads of fuzz and reverb in the mix. That was their formula, and even if it was not the most original one, it was definitely effective (specially in their second attempt). Now let’s see what they did with Ummon.

However, Slift have made a choice for their third work. This one is turning their heads towards the deep space, and heading there with no intention of coming back. Their call for prog and motorik rock overtakes John Dwyer’s vision by going further and heavier than him in his pilgrimage towards space rock. The result, displayed in this “UMMON”, is absolutely unbeatable.

Ummon is a beast of a record, from its black-and-white cover to the eponymous opening track. From the colossal, 10-minutes long “Citadel on a Satellite” to the amazingly named “Dark Was Space, Cold Were the Stars“.

From the colossal, Kikagaku Moyo-esque, 10-minutes long “Citadel on a Satellite” to the amazingly named “Dark Was Space, Cold Were the Stars“, everything in this record seems to be in the right place. Jean’s reverberating vocals, Canek’s precise drumming, Remy’s thick basslines… All planets aligned to give birth to the ultimate space rock record of the year, and maybe the decade. Fun and heaviness shaking hands. A collision between two supersonic spaceships, leading to an atomic explosion whose only remnant is a pedal-shaped cloud. Those are the devastating images brought to our minds by this Toulouse trio in this record.

And yes, I know it goes beyond the 80 minutes, but all of them are totally worth it. Also, I bet you do not have much stuff better to do, especially during these quarantine times. So, in case you have not listened to this marble masterpiece yet, go ahead, push play, and fit the safety belt: this is, forgive the cliché, a hell of a ride.

If all things More Fuzz is about could be compressed into a single record, Ummon would be a perfect candidate. Heaviness, riffs, psychedelic, science-fiction, hazy vocals, sonic excellency. Formidable.

UMMON, Citadel on a Satellite, Thousand Helmets of Gold