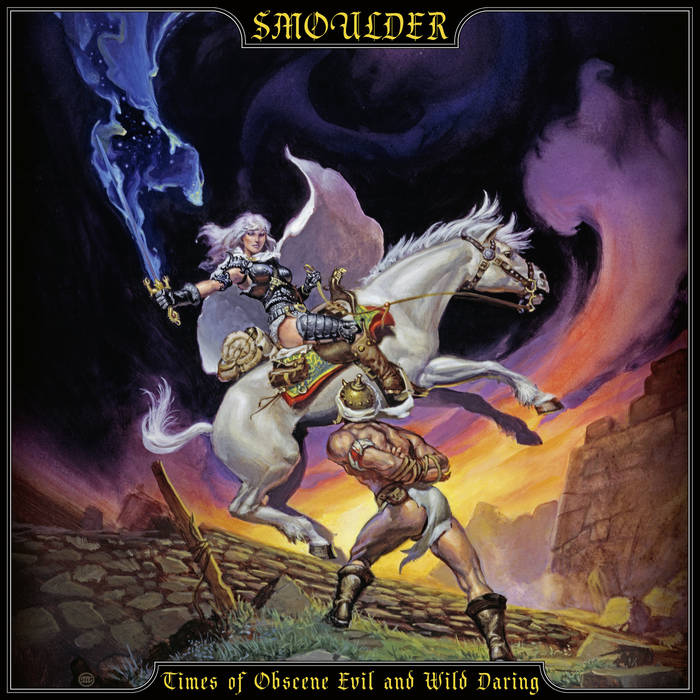 Beware of the sword woman and her rage!

Smoulder is a Canadian band formed by singer Sarah Ann (vlogger in Sam Dunn’s Youtube channel BangerTv) and guitarist Shon Vincent (Ezra Brooks, Gatekrashör, ex-Manacle, ex-Hrom) in their hometown Calgary back in 2013. After several years of failed attempts to launch the band’s professional career, early in 2018 the pair decided to cross the border to Chicago to reunite with Collin Wolf (guitars) and Kevin Hester (drums) with the firm intention of cementing the status of the band.

After the reunion with their fellow American musicians, they went to the studio to record what will become their debut demo “The Sword Woman”, self-released by the band back in April 2018. Made up of three songs that exude their love for traditional heavy metal, doom metal and swords and sorcery stories, the demo was well received by critics, bloggers and fans of the heavy underground and Hoove Child Records decided to release a 7” version of it, which sold out in a matter of weeks. Later, the band recruited Adam Blake as a bassist and thus they were complete as a band.

It would not take long for them to get the attention of Enrico Leccese, owner of Italian label Cruz Del Sur Music (one of the most prolific and important labels of the current heavy underground scene), who extended them an offer to form part of the label’s staff. After the record deal was locked, they went to record their debut album “Time Of Obscene Evil And Wild Daring”, which comes out today, on April 26.

“Ilian Of Garathorm”, a clearly reference to Michael Moorcock’s multiverse, opens the album with sounds of wind and bells at the distance, then enters the band with heavy riffs and thunderous drums and the powerful vocals of Sarah Ann. With this, begins a fantastic journey that you know it is going to be EPIC in every sense. Then comes “The Sword Woman” a rearranged version, more heavy and doomy, that the one that appeared in their 2018’s demo. To accompany the song, the band did a fan video with stills from the movie “Hundra”.

“Bastard Steel” is traditional metal in its purest form, an up-tempo song with galloping riffs, twin guitars and solid rhythm companion. The lyrics narrate the eternal battle between the forces of good and evil, with George R.R. Martin’s “A Song Of Ice and Fire” saga as the background scenario, particularly the adventures of Jon Snow character. Then comes “Voyages Of The Sunchaser”, another reworked version from their debut demo that expands its quality thanks to the album’s production, with lyrics that refer directly to Dungeons & Dragons and Dragonlance universe.

The last third of the album starts with “Shadowy Sisterhood”, and as the title suggest it focused on the rite of initiation of a soon-to-be witch. The song has a gloomy vibe and could perfectly fit in the soundtrack of 2015’s The Witch movie. “Black Gods Kiss” closes the album with a clearly rendition to the band’s fondness to doom metal, specifically to the Finnish variant. In this sense, the song is slow, heavy and dramatic in its narrative and you can trace elements of bands like Reverend Bizarre (obviously!), Spiritus Mortis, Minotauri, Cardinals Folly, etc.

When you finish “Time Of Obscene And Evil Wild Daring” you know you have listened to one of the best debut albums of recent times. If you look back at musical history, since the early 80’s only a few bands had manage to create a unique sound from these two musical subgenres like Witchfinder General, Pagan Altar, Cirith Ungol, Candlemass, Solitude Aeturnus, Altar Of Oblivion, Solstice (to name a few). Bands like Smoulder come to claim the rightful place of epic doom metal within the heavy underground scene.

Besides the music, the album counts with a fantastic cover thanks to the incredible artwork of the highly talented artist Michael Whelan, best known for having illustrated the covers of the famous editions of Michael Moorcock novels, also used by Cirith Ungol for their albums. Another highlight it’s the production work Arthur Rizk, also known as the drummer of traditional metal alumni Eternal Champion.