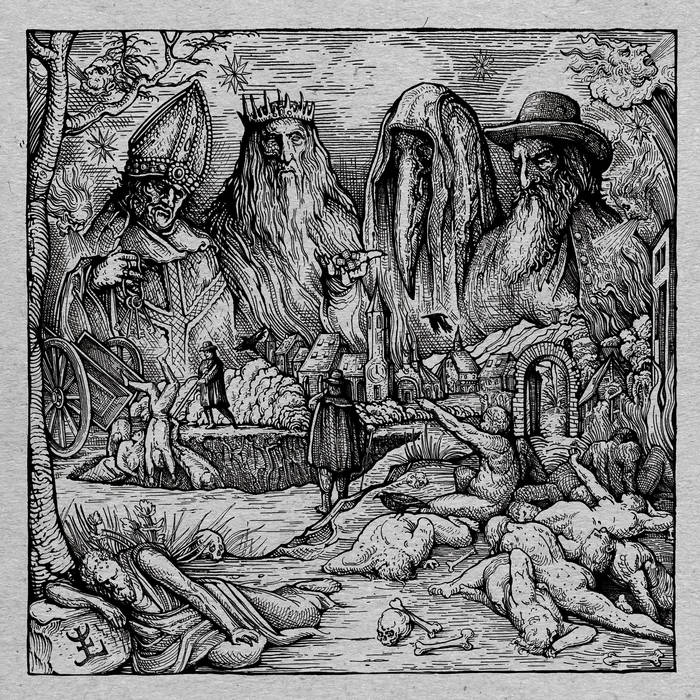 Dopelord are no rookies to the European stoner/doom scene. Even if they have not (yet) climbed to the top of the festivals, and some distracted stoners may have overlooked them, their consistency and savoir-faire in the genre have turned them into one of the most secure stocks around. And once again, they have returned to prove it.

The hype is high after two great works like their 2014 “Black Arts, Riff Worship and Weed Cult” (quite self-explanatory) and their stunning 2017 “Children of Haze” (review here). However, Dopelord have managed to deliver another acid fuzz masterpiece which deepens even more into their heavy af basslines and its psychedelic halo. And what is better, it looks like they have done it effortlessly, sounding smoother and less cliché than ever.

Truth must be told: imho the weakest track of the whole record is the first one. And not even that means it is a bad one! The only issue with“The Witching Hour Bell” is that it is so close to the Electric Wizard sound that it may end up burnt in the comparison. This may indeed be the only serious threat for this record: to be dismissed as yet another EW mimic. But if you dare to listen to it deep and calmly, though, it will become clear as day that these four Polish have more to offer than a simple homage.

For example, “World Beneath Us”, and especially,“Hail Satan” reminds of some of Monolord’s best moments, only changing the characteristic haunting singing of Thomas Jaeger for some more aggressive vocals. Because Piotr Zin and Paweł Mioduchowski sharing the vocals is another of the strongholds of the band since it adds an epic feeling of battle cry.

Besides, that same Monolord’s eye for catchiness and melody, even when in sludgy terrain like this, is undoubtedly the ace up Dopelord’s sleeve. That is, at the end of the day, which distinguishes Dopelord from the million bands in the subgenre with Dope, Witch, Mammoth or Bong in their names.

Already halfway the record, “Heathen” keeps striking on the same keys with equally great results. The easiness in which a sharp riff on top of a massive drum and bass base is enough to build one awesome track after another is something to be admired. The first third of “Doom Bastards” is a surprising but welcome oasis of calm right before the slowly growing storm. Doom in its purest form is in which this amazing song ends, once again showing the flexibility of the band. It seems like they know no comfort zone: either low or fast pace, these Lublin guys are equally intimidating.

“Headless Decapitator” is a surprising way to close an album. Here, they press the accelerator pedal until it breaks and leaves you knocked out after just 1’34”. Pure wrath: a hint pointing that Dopelord stepping into new terrains is something we should be drooling for.

It seems that these guys did indeed make a deal with Satan. Otherwise, I don’t understand how they found such an appropriate cover for these dreadful, plague times of ours in advance.