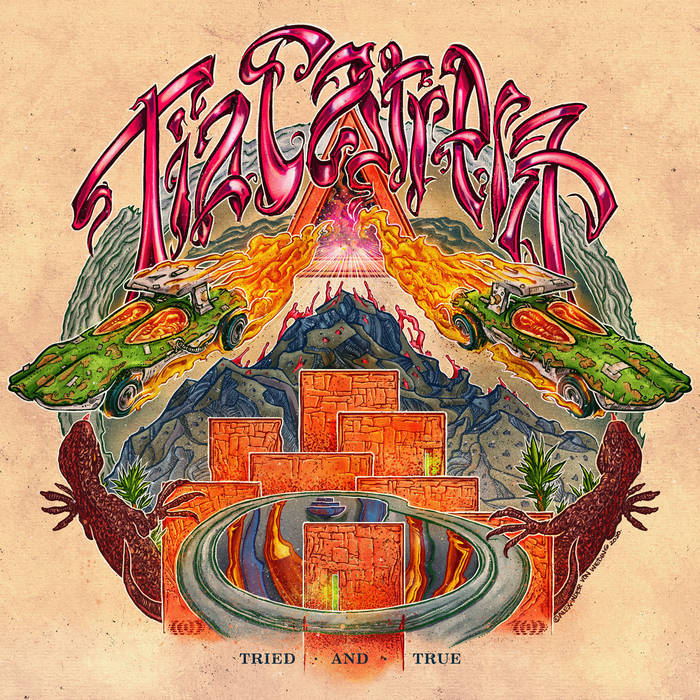 Your dose of psychedelic cactuses’ jams 🌵

Texas jam’s kings Tia Carrera are back with Tried and True. Their sixth LP, but only the second since 2011. An instrumental rampage straight out of the US desert. Fans of  fuzzy guitars, low basses and psychedelic cactuses : fasten your seatbelt and enjoy the trip !

Back in February, 2020 offered us a first comeback story, with the excellent Refractions by Swedish band Lowrider. The second one came out one week ago, in June, with the new Tia Carrera opus Tried and True, signed on Small Stoned Records. Nothing surprising, some people might say. Last year, the Texas trio already released a two-track album entitled Visitors/Early Purple. However, Tried and True remains one the only two disks they released since 2011. Not much, from a band active since 2005.

A situation even more surprising when it comes to speak about a band specialized in jam sessions. We can easily imagine Tia Carrera has an important stock of recordings, so why did they release so few albums in the past years ? The story tells that, as great professionals and perfectionists, they only accept to share their top material and this process takes time. In all cases, scarcity generates expectations and this is what happened with Tried and True. Expectations rewarded by this supersonic opus. Tried and True is a 37 minutes injection of hectic psychedelic jams. An instrumental ode to master Hendrix served with desert rock sauce and cosmic candies.

The trip starts loudly with “Layback“. First track, and first crazy solo for Jason Morales and his fuzzy guitar. Layback directly situates Tia Carrera’s sound : somewhere in the desert between Jimi Hendrix and stoner territories. The tempo slows down in the second half, leaving the place to a more physical rhythmic passage. The following track “Taos” begins in a pure Hendrix way. The acid guitar finds his winding path over a harsh drumming and a low bass line. The rhythmic section shakes the guts while guitar licks overload the listener’s brain. The atmosphere is highly psychedelic and the music heads, from time to time, to experimental areas.

Third track “Swingin’ Wing” starts with a crushing riff, and the whole track follows a more riff-oriented perspective. Here, Tia Carrera displays an enraged desert rock, still magnified by Morales solos. It ends in a supersonic manner, coming back to loud stoner riffs. Only error: this weird tinnitus that sneaks around the track and which does not add value to it. Fourth track “Zen and the Art of the Thunderstorm” drops the listener into more acid territories. Guitar experiments on phrases, over a tribal-like rhythmic section. It sounds like a kind of electrified shamanic ceremony and the psychedelia fills the atmosphere.

Tia Carrera saved the best for last with eponym track “Tried and True“. A 15 minutes fuzzy onslaught that alternes cutting stoner riffs, hectic guitar jams and somatic rhythmic sections. The guitar leads the exploration, from melodic to atmospheric passages. The progression and the work on textures add a shade of heavy psychedelia to the music. A special mention should be given to the second half of the track, true cosmic rampage that catapults you directly on Mars desert.

Tried and True is intense and works as an electric shock.  One comes up out of the disk full of energy, almost excited. The experience is as physical as mental and the 37 minutes seem quite short for such an entertaining trip. Personally, it really makes me want to see them in live. And hope that Tia Carrera will not wait ten years before releasing their next opus.

During summer holidays, driving your muscle – or normal – car !