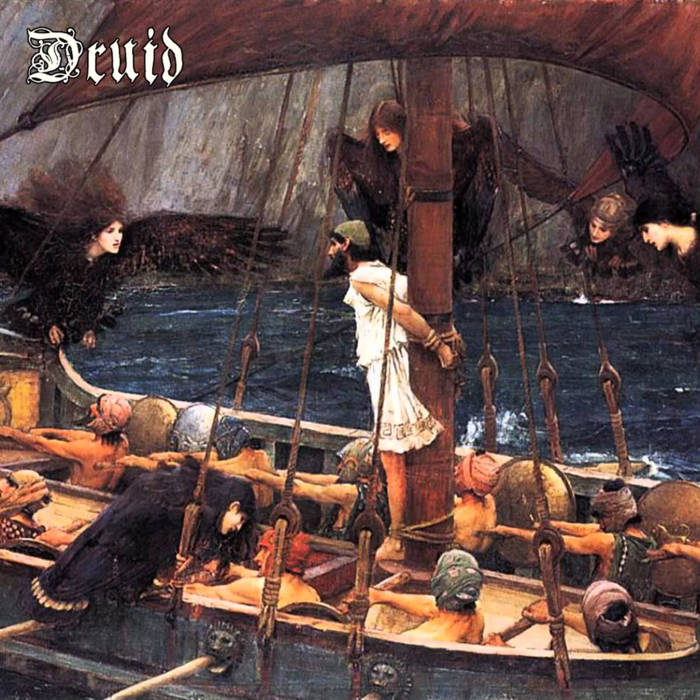 Druid is a self-purported Rock ‘n Roll band from Athens, Ohio, but their sound actually transcends multiple contemporary genres, most notably: Doom, Psych, and Stoner Rock.  This release is unlike anything Druid has produced thus far, however, because the album tells a story and consists of entirely original heavy music. But like a good and effective storyteller, Druid keep the listener interested—this time with their own brand of fuzz, heaviness, shared vocals, and structured songwriting.

The band is Kaleb Shaffner (Guitar, Vox), Maximilian Schmitz (Bass Guitar, Vox), Adam Mayhall (Drum Kit), and Gregory Ornella (Keyboard). Both of their albums have been recorded at Ohio University and, upon reviewing what information the band has made available to the public, Druid is a young but powerful group of musicians.

This is the second full album from Druid in the same numbers of years. After listening to Odysseus on repeat since its release, I hope Druid release more—and soon. Prior releases have contained covers, but this is an entirely original work. Although Rock ‘n Roll definitely serves as a cornerstone of Druid’s sound, the same could be interpreted or characterized as transcending multiple contemporary genres. Their description on Bandcamp does acknowledge the ability to transcend, but this is highlighted with Odysseus. Also, their Facebook page lists a wide array of influences: Led Zeppelin, Black Sabbath, Pink Floyd, Sleep, Jimi Hendrix, Fu Manchu, Mastodon, The Doors, Radiohead, Melvins, Rush, Cream, Blue Cheer, Wolfmother, and Tool.

Implicit in the title and album artwork are obvious references to The Odyssey, an epic poem attributed to Homer, who was believed by the Ancient Greeks to be the first and greatest epic poet and, furthermore, has become central to the Western canon. But what you will hear only by listening to this album is Druid have a musical proficiency; it allows the sound to transcend modern genres and, as a result, they produce a compelling musical aesthetic. Odysseus, with its title being based on the name of the main character in the referenced story whose name is not modified by Druid, is a journey of Rock n’ Roll blended with Psych/Stoner Doom but, don’t be afraid, for whatever reason, you’ll also hear some “progressive” riffs and drum–signatures.

The title–track, to me, is an overview of all the different sounds you will hear from this album; and, like an effective overture, the music and lyrics tell a story to keep the listener interested. “Odysseus”, the track, beings with a main theme of intertwining chords and melody and is adventurous in itself. But the theme comports with the remainder of the song and the album and the result is a “complete” album where every second is interesting to the listener. “Odysseus” could be ascertained as having a “Part I” and “Part II” even though no explicit distinction on the track listing would support such a belief.

Although King Crimson is not listed by the band as an influence on Facebook, there are moments throughout this album where Druid employ complex chromatic riffs that are “progressive” in nature because their natural sound and musical effect links one segment or series of lines with another series and tempo often changes. “Part II” is distinguished sometime after 11 minutes into the title–track when the guitar becomes super heavy and, to effectively relate this part of the story, the tempo is slow as hell. Simply put, we are talking about Doom. But the band shares vocal duties and what they collectively produce is strong, clean, and in harmony—This is “aesthetic” Doom, if you will.

While “Odysseus” can be characterized as an overture, don’t let that word fool you—the track is a fucking monster and, in my opinion, a musical masterpiece relatively tantamount to Pink Floyd’s “Echoes”. The remaining songs on the album dive deeper than the overture into critical points of the Odysseus narrative and the musical effect is an increase in the Temperature Level but, even though similar sounds have been produced by Druid in the title–track and earlier releases, these tracks are fully developed and have a structure to keep the listener interested. Oh, and the guitar player shreds pure heavy psych/blues influenced fuzz.

Putting this on then not listening to this album all–the–way–through should merit a punishment of getting shot in the fucking head.

Because it’s a killer sophomore album from a young US band in the heavy scene and contemporary Rock ‘n Roll. Also a good bet for my 2016 Top 5.

I’d want to be where I can focus on the music, but this is subjective: The album will always play the same.

Mr. Fuzz reviewed Druid’s self-titled LP in 2015, but the band has developed—substantially—since that time.